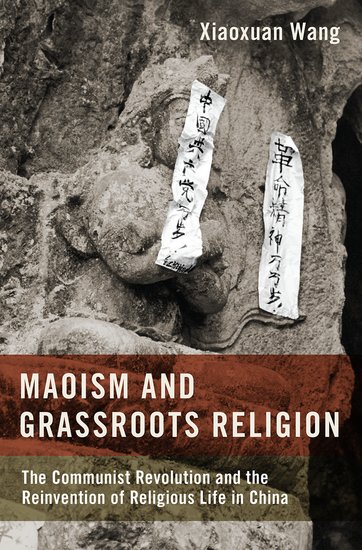 Maoism and Grassroots Religion explores grassroots religious life under and after Mao in Rui'an County, Wenzhou of southeast China, a region widely known for its religious vitality. Drawing from unexplored local state archives, records of religious institutions, memoirs, and interviews, it tells the story of local communities' encounter with the Communist revolution, and its consequences, especially competition and struggles for religious property and ritual space. Rather than being totally disrupted, Xiaoxuan Wang shows, religious life under Mao was characterized by remarkable variety and unevenness and was contingent on the interactions of local dynamics with Maoist campaigns—including land reform, the Great Leap Forward, and the Cultural Revolution. The revolutionary experience strongly determined the trajectories and development patterns of different religions, inter-religious dynamics, and state-religion relationships in the post-Mao era. Wang goes beyond the image of totalistic control and suppression, to show how Maoism is relevant to religious revitalization in the post-Mao era and, more broadly, the modern fate of Chinese religions and secularism in East Asia.

Maoism permanently altered the religious landscape in China, especially by inadvertently promoting the localization and even (in some areas) expansion of Protestant Christianity, as well as the reinvention of traditional communal religion. Contrary to the popular image of total suppression and disruption during the Mao years, this book shows that religious changes under Mao were highly complex and contingent on a confluence of political campaigns, local politics and community responses.The post-Mao religious revival had deep historical roots in the Mao years, Wang argues, and cannot be explained by contemporary economic motives and cultural logics alone. This book calls for a new understanding of Maoism and secularism in the People's Republic of China.

List of Maps, Figures and PhotosAcknowledgements
Translations, Characters, and Abbreviations
Introduction
Chapter One: Revolution and Religion: The Pre-1949 Encounter
Chapter Two: The Land Revolution and Religious Communities in the Early 1950s
Chapter Three: The Contests for Communal Temples in the Early 1950s to the Mid-1970s
Chapter Four: Destruction and Renewal: Christian Churches from the Early 1950s to the Mid-1960s
Chapter Five: Diversification and Unification: Protestant Churches during the Cultural Revolution
Chapter Six: Mixed Blessings: Growth and Schisms among Protestant Churches, 1978-2014
Chapter Seven: Déjà Vu? -The Temple Reclamation Movement and the Revitalization of Rural Organizations, 1978-2014
Conclusion
Chinese Term List
Bibiliography
Index

Xiaoxuan Wang is a historian of modern and late imperial China. His research interests include communal religion, Christianity, and the Chinese diaspora in Europe and the US. He received his Ph.D. from Harvard University in 2015.