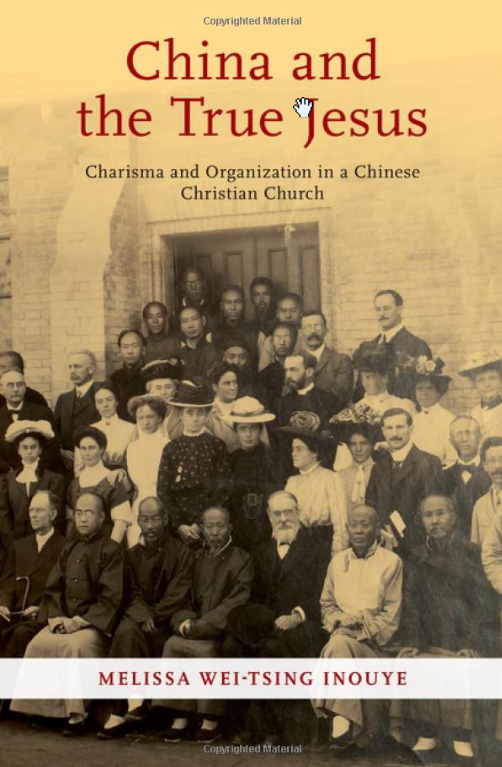 Melissa Wei-Tsing Inouye, China and the True Jesus: Charisma and Organization in a Chinese Christian Church (2019)

In 1917, the Beijing silk merchant Wei Enbo's vision of Jesus sparked a religious revival, characterized by healings, exorcisms, tongues-speaking, and, most provocatively, a call for a return to authentic Christianity that challenged the Western missionary establishment in China. This revival gave rise to the True Jesus Church, China's first major native denomination. The church was one of the earliest Chinese expressions of the twentieth century charismatic and Pentecostal tradition which is now the dominant mode of twenty-first century Chinese Christianity. To understand the faith of millions of Chinese Christians today, we must understand how this particular form of Chinese community took root and flourished even throughout the wrenching changes and dislocations of the past century.

The church's history links together key themes in modern Chinese social history, such as longstanding cultural exchange between China and the West, imperialism and globalization, game-changing advances in transport and communications technology, and the relationship between religious movements and the state in the late Qing (circa 1850-1911), Republican (1912-1949), and Communist (1950-present-day) eras.

Vivid storytelling highlights shifts and tensions within Chinese society on a human scale. How did mounting foreign incursions and domestic crises pave the way for Wei Enbo, a rural farmhand, to become a wealthy merchant in the early 1900s? Why did women in the 1920s and 30s, such as an orphaned girl named Yang Zhendao, devote themselves so wholeheartedly to a patriarchal religious system? What kinds of pressures induced church leaders in a meeting in the 1950s to agree that "Comrade Stalin" had saved many more people than Jesus?

This book tells the striking but also familiar tale of the promise and peril attending the collective pursuit of the extraordinary-how individuals within the True Jesus Church in China over the past century have sought to muster divine and human resources to transform their world.

"China and the True Jesus is one of the most exciting and original recent contributions to the history of Christianity in China. Boldly researched, conceptually ambitious, and elegantly written, Inouye's book makes a strong case that the True Jesus Church, rather than a fringe religious group, intersects with and opens up vistas into central questions in Chinese history. Almost every page sparkles with analytical insight that will surprise both specialists and nonspecialists in the history of Christianity in China. This provocative and stimulating book deserves to be widely read; it will be of interest to historians of modern China, scholars of religion, and those interested in a broad range of theoretical issues, including questions about the intersection of religion and civil society." -- Albert M. Wu, American University of Paris, The Journal of Asian Studies

"Far from being a dry, institutional history, China and the True Jesus is a tour de force of scholarship. Inouye has resisted the unfortunate trend of quick summaries and instead offers a sprightly written, wide-ranging account. She surveys the academic debates, unearths and translates rare primary source materials, and captures the feel of the miraculous worlds of believers. While she takes dreams and visions seriously, she helps us understand their significance by carefully framing the supernatural within history. China and the True Jesus is recommended not only for those interested in China but for anyone looking for a compelling story of how religions are born and survive." -- Colleen McDannell, Church History

"For those who love learning about religion and history, this book is for you. It's about the history of Christianity in China. . .. One thing I found especially interesting (because it's similar to Joseph Smith's first vision) was that there were others who had visions of God and Jesus. One was a king name Hong Xiuquan who had a vision in 1837 . . . Not only did he see God and Jesus, but Heavenly Mother appeared in his vision as well. . . . I liked this because it reminds us that God speaks to people of all cultures and religions. . . . These are just a few of the various fascinating stories found in this book, and I'm very pleased that many of the stories are about women . . . If you love learning about how people shaped history, you will definitely enjoy this book." -- Dani Addante, Exponent II blog

"China and the True Jesus provides the reader with an insightful platform from which to view the tumult of modern Chinese history from below. This book is essential reading for any scholar of Christianity in China and anyone interested in exploring the relationship between charisma and power." -- Alex Mayfield, Pneuma

"This volume is an exemplary work of religious history, in which Inouye combines archival research and fieldwork among current believers, balanced with just the right amount of theory to show how this singular story might relate to other religions in terms of charisma vs. organization, the social and economic roots of spiritual receptivity, the intersection of the mundane and the miraculous, church and state relations, the language of moral discourse, etc. Inouye has mastered the delicate art of writing about other people's religious beliefs and experiences with sensitivity, compassion, and insight. In addition,�China and the True Jesus�is a terrific introduction to the sweep of modern Chinese history" -- Grant Hardy, By Common Consent

"This is a brilliant combination of thorough archival research and meticulous qualitative field work in China, resulting in one of the finest studies on Christianity in China in the English language that I have ever seen. The author's sympathetic insight into one of the most significant of the Chinese independent churches is unparalleled and will remain a benchmark for such studies for years to come."--Allan H. Anderson, Professor of Mission and Pentecostal Studies, University of Birmingham

"The True Jesus Church seems like a bundle of contradictions: nationalist yet universalist; charismatic yet highly institutionalized; cooperating with the state yet rejecting secular powers; world rejecting yet this-worldly. In Inouye's expert hands this complex group becomes less paradoxical and her insightful analysis clarifies our understandings of gender and modernity in China, relations between religions and the state there, and even the nature of authority itself."--Robert P. Weller, Professor of Anthropology and Director of Graduate Studies, Boston University

"Melissa Inouye has written the first full-length study in English of one of the most important strands within indigenous Chinese Protestant Christianity, the True Jesus Church. It is a fascinating read; her writing sparkles, drawing the reader along effortlessly as she traces with vivid clarity the events and pressures-within China and beyond-that gave rise to the True Jesus Church. She highlights the connections between her Chinese story and 'global Christian restoration movements' since the 18th century, including the early Mormons and American Pentecostalism, among others. This makes the book profitable reading for every student of modern religion, in China or elsewhere."--Ryan Dunch, Professor of History and Classics and Director of the Program in Religious Studies, University of Alberta

Melissa Wei-Tsing Inouye is a Senior Lecturer in Chinese Studies at the University of Auckland. Her areas of research interest include the social and cultural history of modern China, charismatic global Christianity, and women and religion. She received her Ph.D. in East Asian Languages and Civilizations from Harvard University in 2011.