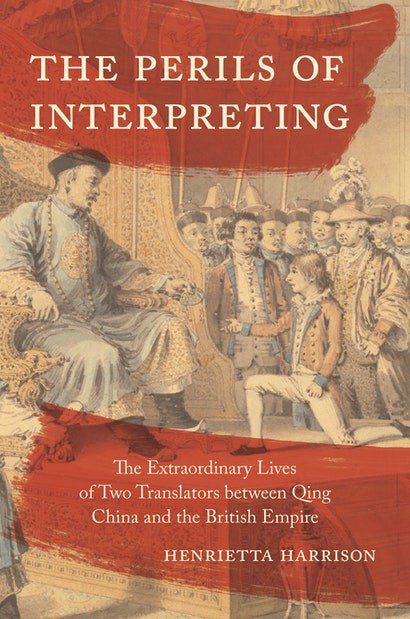 The 1793 British embassy to China, which led to Lord George Macartney’s fraught encounter with the Qianlong emperor, has often been viewed as a clash of cultures fueled by the East’s disinterest in the West. In The Perils of Interpreting, Henrietta Harrison presents a more nuanced picture, ingeniously shifting the historical lens to focus on Macartney’s two interpreters at that meeting—Li Zibiao and George Thomas Staunton. Who were these two men? How did they intervene in the exchanges that they mediated? And what did these exchanges mean for them? From Galway to Chengde, and from political intrigues to personal encounters, Harrison reassesses a pivotal moment in British-China relations. She shows that there were Chinese who were familiar with the West, but growing tensions endangered those who embraced both cultures and would eventually culminate in the Opium Wars.

Harrison demonstrates that the Qing court’s ignorance about the British did not simply happen, but was manufactured through the repression of cultural go-betweens like Li and Staunton. She traces Li’s influence as Macartney’s interpreter, the pressures Li faced in China as a result, and his later years in hiding. Staunton interpreted successfully for the British East India Company in Canton, but as Chinese anger grew against British imperial expansion in South Asia, he was compelled to flee to England. Harrison contends that in silencing expert voices, the Qing court missed an opportunity to gain insights that might have prevented a losing conflict with Britain.

Uncovering the lives of two overlooked figures, The Perils of Interpreting offers a valuable argument for cross-cultural understanding in a better-connected world.

Henrietta Harrison is professor of modern Chinese studies at the University of Oxford and the Stanley Ho Tutorial Fellow in Chinese History at Pembroke College. Her books include The Man Awakened from Dreams and The Missionary’s Curse and Other Tales from a Chinese Catholic Village. She lives in Oxford, England.

Jifeng LIU, Negotiating the Christian Past in China: Memory and Missions in Contemporary Xiamen (2022)