for the International Conference on
“James Legge’s Life and Works in Hong Kong:

A Bicentennial Celebration of His Birth”

Though James Legge’ssinological works have earned him world-wide acclaim, especially his translations and commentaries prepared for The Chinese Classics (1861-1872, first edition; 1893-1895, second partially revised edition) and The Sacred Books of China (1879-1891), relatively little has been done to explore and evaluate the nature and value of his works published in Chinese media. The term “Chinese media” is in the plural, because some were completed in the form of novelletes, using “official language” (guānhuà官話), while others were written in demotic Cantonese.

Beyond this linguistic categorization, however, there are also works prepared (1) for informing Chinese Christians about Christian culture and Christian worship; (2) for ministerial purposes among Chinese evangelists and other Chinese persons in Hong Kong, (3) as novelletes and tracks prepared as “witnessing tools” and based on biblical texts in Chinese, and (4) educational materials including bilingual texts. These four kinds of Chinese works are not all equally of the same value, and so they deserve further probing and assessment, especially in terms of what John LAI Tsz Pang 黎子鵬has referred to as the general failure of missionary translations and other works in Chinese as they sought to offer some insight into their Christian worldview and win converts for their Christian Savior. At least one of Legge’s translations, a work done as a bilingual reader for elementary school students, was replete with themes that smack strongly of colonialist influences, and so we should critique these matters directly and precisely. Yet there are others which also Prof. LAI knows about, especially those works produced on the stories of Abraham and Joseph by Legge, which were done in the form of novelletes, and revealed a Ruified Christian apologetic that was not merely evangelistic, but was more of a pre-evangelistic wise story seeking to interest Chinese readers in those biblical narratives and their purported living wisdom. These and others, particularly his works pursued in Cantonese dealing with the stories of Daniel’s four companions and the parable of the prodigal son, both of which were more directly evangelistic in their nature, are worthy of greater scrutiny and honor.

So, by means of these evaluative efforts we intend to supplement what is often simply overlooked in Leggian scholarship, and reveal another very important aspect of James Legge’s life and works completed while he was in Hong Kong as a missionary (1842-1868) and as the pastor of Union Church (1870-1873). 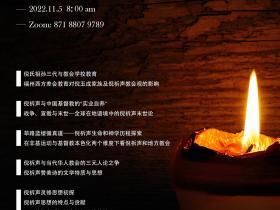