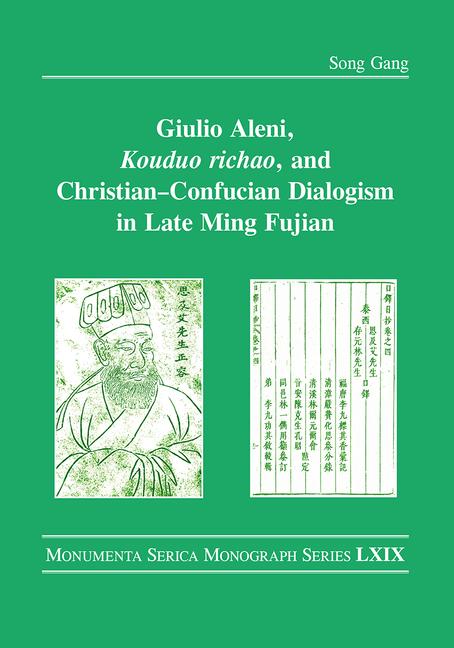 Song Gang is Associate Professor of Chinese History in the School of Chinese, the University of Hong Kong. His research interests include cultural exchanges between China and the West, with a focus on the intercultural encounter of the Jesuit missionaries and Confucian scholars in late imperial China.

Christian dialogic writings flourished in the Catholic missions in late Ming China. This study focuses on the mission work of the Italian Jesuit Giulio Aleni (Ai Rulüe 艾儒略, 1582–1649) in Fujian and the unique text Kouduo richao 口鐸日抄 (Diary of Oral Admonitions, 1630–1640) that records the religious and intellectual conversations among the Jesuits and local converts. By examining the mechanisms of dialogue in Kouduo richao and other Christian works distinguished by a certain dialogue form, the author of the present work aims to reveal the formation of a hybrid Christian–Confucian identity in late Ming Chinese religious experience.
By offering the new approach of dialogic hybridization, the book not only treats dialogue as an important yet underestimated genre in late Ming Christian literature, but it also uncovers a self–other identity complex in the dialogic exchanges of the Jesuits and Chinese scholars.
Giulio Aleni, Kouduo richao, and Christian–Confucian Dialogism in Late Ming Fujian is a multi-faceted investigation of the religious, philosophical, ethical, scientific, and artistic topics discussed among the Jesuits and late Ming scholars. This comprehensive research echoes what the distinguished Sinologist Erik Zürcher (1928–2008) said about the richness and diversity of Chinese Christian texts produced in the 17th and 18th centuries. Following Zürcher’s careful study and annotated full translation of Kouduo richao (Monumenta Serica Monograph Series, LVI/1-2), the present work features a set of new findings beyond the endeavours of Zürcher and other scholars. With the key concept of Christian-Confucian dialogism, it tells the intriguing story of Aleni’s mission work and the thriving Christian communities in late Ming Fujian.

Chapter One: From Literary Dialogue to Cultural Dialogism

Chapter Five: Salvation before the Eyes: Objects, Images, and Liturgies